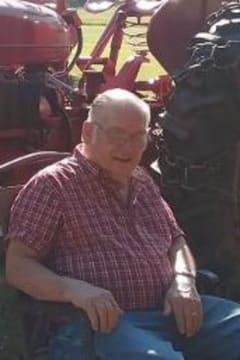 Albert Stanley Ashley age 80 passed away peacefully on Friday, June 18, 2021 at Mercy Health St. Mary’s Hospital. He was born April 8, 1941 in Rockford to Stanley and Rose Ashley. Albert married Gloria Jean Hoffman on August 21, 1965 in Rockford and was a Hilo Operator at Gibson Manufacturing. Albert was a simple man with more common sense than most. He was born a natural handy man and could figure out how to repair almost anything. He loved God and was true to his faith and belief that God would work things out and would see you through every situation. Albert put God first, his wife and then his sons next. He was the youngest of 11 children in his family and was always making sure his mother was taken care of after his father died. He love his family, his farms, cows, tractors, Chevy trucks, local restaurants, southern gospel music, living in the country, mowing the lawn, family gatherings, quick humor, meatloaf, rides in the country, Gunsmoke, Andy Griffith, pride in the family, being a home body. Things he really disliked were snakes, large crowds, sweat pants, stuck up people, tuna fish, heavy traffic and stopping at yard sales. Farm sales however were okay. Albert loved to tease his grandchildren and his many nieces and nephews. His life time dream was to own a couple of milk cows which he was able to see come true and the whole family enjoyed as much as him. Albert was a content man and is now joining his son, Tom, and many friends and family in heaven. His family wishes to thank all of his care takers for their dedication and compassion. He was preceded in death by his son, Thomas; his siblings, Stacey Ashley, Woodrow Ashley, June Bean, Goldie Ross, Shirley Briggs, Evelyn Dove, and Robert Ashley. He is survived by his wife of 55 years, Gloria; sons, Scott and Joanne Ashley, Philip and Sarah Ashley; 3 grandchildren; siblings, Donna Salyer, Gene and Verna Ashley, Joan Brace; several nieces and nephews. Funeral services will be held on Wednesday, June 23, 2:00 P.M. at the New Life Free Methodist Church with Rev. James Tol officiating. Inurnment in Solon Township Cemetery. Friends may meet the family at the Hessel-Cheslek Funeral Home on Tuesday, 6 to 8 P.M. and on Wednesday, at the Church from 1:00 P.M. until time of service. Those who wish may make memorial contributions to New Life Free Methodist Church.