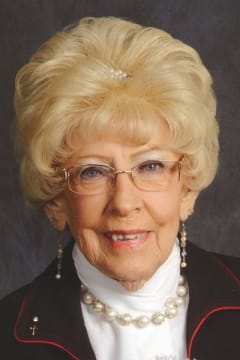 Ann Domicilia Pilarsyk, age 96, passed away peacefully at her home in Sparta on Saturday, Dec 12, 2020 with her family by her side. She was born in Grand Rapids, Michigan on September 1, 1924 to Charles and Barbara (Bartauskas) Galinis. She was preceded in death by her husbands, Joseph M. Pilarsyk and Irving F.(Dude) Rolstone. She met Dude while working as a Grinder at the Muskegon Piston Ring Company. She took some years off to raise her family. She then went to Sparta Area Schools where she worked and Managed the Food Service Department and is affectionately known to many who attended Sparta Schools as, “the Lunch Lady”. After retiring from the School System, she was bored, so went on to Sam’s Club in the Taste Testing Department where she received many Awards for Top Salesperson and retired at age 85. Ann enjoyed life and had many friends. She traveled with them to many places like Russia, her homeland Lithuiania, Europe, South and Central America, and Alaska. Ann is survived by her daughters, Teresa and Jim Schab, Jeanine and Kevin Elliott; grandchildren, Shawn and Jessica Guiles, Arron Guiles, Joshua Guiles, Amanda Guiles and Chris Rocafort, Aaron and Kelly Schab, Lindsey Schab, Brandon Elliott; great grandchildren, Logan Guiles, Cody Guiles, Blake Guiles, Diego Rocafort, Mateo Rocafort, Nikko Rocafort, Mason Guiles, Jackson Schab, and Lillian Schab and several nieces and nephews . She was preceded in death by parents, Charles and Barbara Galinis; husbands, Irving and Joseph, sister, Joanne (Paul) Kozlowski; brothers, Bill (Florence) Galinis , her twin Dominic(Della) Galinis, Donald Galinis; Mass of the Christian Burial will be offered on Monday, December 21, 11:00 A.M. at Holy Family Catholic Church with Msgr. Terrence Stewart Celebrant. Interment in Sts Peter and Paul Cemetery in Grand Rapids. Friends may meet the family at the Church on Monday morning from 10:00AM until time of mass. Those who wish may make memorial contributions to EWTN(The Catholic Channel Television), 5817 Old Leeds Rd. Irondale, AL 35210 or Holy Family Catholic Church.

I remember Mrs. Polarsyk from my time at Sparta Middle School. She was so kind and such an elegant woman! She always had a smile on her face! Prayers for her family.
- Pam Anderson