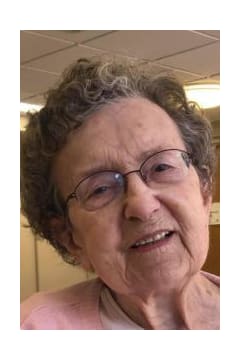 Arlene Clara Peters, aged 92, passed away peacefully on 1 April 2020 at Porter Hills Village, Grand Rapids. Arlene was born in Sparta, Michigan on 14 May 1927 to Emanuel C. Baehre and Marie M. (Burgtorf) Baehre. Her childhood was spent on the family farm at Gooding a few miles west of Sparta. She attended Trinity Lutheran School, Conklin, Sparta High School and then Western Michigan University.
Arlene married Richard Roland Peters on 14 February 1947 and thereafter supported her husband on Village Green Farm, the Peters‘ family farm in Casnovia Township in Muskegon County. Richard and Arlene moved to Walker upon Richard’s retirement from farming.
Arlene was predeceased by her husband Richard in March 1995 (almost exactly 25 years ago) and her younger brothers Henry, Walter and Gordon Baehre. She is survived by her son Richard Arlan and his wife Marion of Friedrichsdorf-Koeppern, Germany and her daughter Kimberly Jane Cramer and her husband Steven of Gilbert, Arizona. She is also survived by two grandchildren: Susan M. Harris and her husband Christopher Harris of London, United Kingdom, and David P. Cramer and his wife Carmen of Mesa, Arizona, one great grandson, Zack Harris of London, United Kingdom, and several nephews and nieces.
Arlene was a life long member of Trinity Lutheran Church, Conklin. On the farm she was very active in leading a large community 4-H club as well as being active in 4-H and county extension work in Muskegon County and the State of Michigan. After retirement Arlene worked very regularly as a volunteer at Spectrum Health Butterworth Hospital in Grand Rapids. She was very committed to this particular volunteer work and for many years her life revolved around it.
Arlene was widely travelled. She and Richard had a small home in Mesa, Arizona which they would visit frequently to be near their daughter Kimberly and her family. She also visited numerous times her son Richard who lived and worked in the British Virgin Islands for 35 years. She accompanied him on a number of business trips to the Far East and Europe and also went on a charitable trip of her own to Panama, to help fit spectacles for impoverished residents in the countryside there.
Internment will be at Trinity Lutheran Cemetery, Conklin. A memorial service will be held at a later date.
Those who wish, may make memorial contributions to the Valparaiso University Peters Family Scholarship Fund.