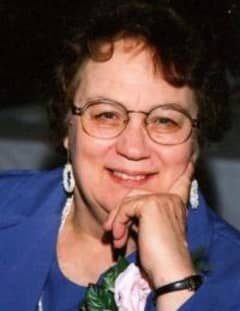 Betty Jo Stevens, age 93, passed away peacefully at Valley View Care Center on Saturday, March 14, 2020. She was born on January 17, 1927 in Ash Grove, Missouri to Ernest and Ethel Anderson. She was preceded in death by her parents, her husband, Jim, in 1998, and her siblings, Bob Anderson, and Mary Carter.
When Betty was young, they moved to McPherson, Kansas, where she attended school. During High School, she enjoyed roller skating, sporting events, and played the oboe in the band. She worked at the candy counter at Duckwall's. Betty and her friends would attend the USO dances in neighboring Ft. Riley, Kansas to help entertain the troops. It is there that she met and fell in love with Jim Stevens. When the war ended, Jim returned home to Sparta, Michigan. He sent a ticket for her to come and visit. They were married on August 2, 1945. When their children were older, Betty enjoyed a career in Central Supply at Butterworth Hospital in Grand Rapids. Upon her retirement, they left Sparta and enjoyed living in the woods, in Wellston, Michigan.
Betty and Jim raised 5 children, by whom she is survived. Sandy (and the late Forrest Frith), Linda (Bill) Longcore, Mike (Karen) Stevens, Mark Stevens and Rick (Alexandra) Stevens; 7 Grandchildren and 8 Great Grandchildren. Betty is also survived by her sister, Virginia Cook of Traverse City, as well as several nieces and nephews.
A Celebration of Life Service is being planned for Betty in the Spring. Details will be updated on the website. Those wishing may make memorial donations to Hospice of Michigan.

I fondly remember your mom as a wonderful neighbor to our family, with her welcoming and calm demeanor, her beautiful southern drawl, and of course, the homemade rootbeer in the basement. With sympathy to each of you from the Tindle family, Melinda.
- Melinda Edgar