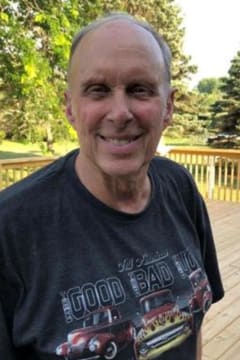 Bruce Carmi Moerman age 74 of Kent City passed away peacefully at his home on Sunday, May 23, 2021 with his family at his side after a short but valiant battle with cancer. He was born on January 16, 1947 in Grand Rapids, Michigan, the only child of Roger and Gertrude Moerman. He served his country in the U.S. Army during Vietnam. He married Sandra Thorne on October 12, 1974 at Mamrelund Lutheran Church. A machine builder by trade, he also owned and operated Bruce Moerman Restorations. He spent many years building hot rods and restoring classic cars which will serve as part of his legacy. He loved racing, especially at Berlin Raceway. He owned many stock cars, working with different drivers though the years. He is survived by his wife of 46 years, Sandra; his daughter and son-in-law, Sara and Bill DeHaan; his beloved grandchildren, Andrew and Audrey DeHaan; and many, many friends, car guys, and gearheads alike. A Memorial service is being planned and will be announced. Those who wish may make memorial contributions to The Arthritis Foundation.

We have so many fond memories of time at Berlin raceway and working in Karl's garage with Bruce. He was a good hearted guy and fun to be around
- Rick and Micki Vankampen
Bruce was a talented, kind and decent man. I don't believe I ever heard him utter a bad word about anyone. He will be missed by many. Fred Boogaard
- Fred Boogaard

Bruce commands my respect as a caring husband, father, grandfather and friend. He will be sadly missed because he possessed the character of a loving and caring man. He so enjoyed working on vehicles with a meticulous ethic. Your friends will miss you greatly as we express our condolences to your loving family. Rest in peace my friend. Robert (Buck) Hicks.
- Robert Hicks