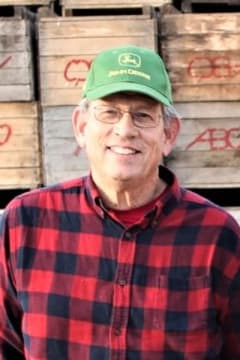 Cliff graduated from Sparta High School in 1968 and continued his education at Michigan State University graduating with a Bachelor’s Degree in Chemistry in 1972 and later a Master’s of Education from Michigan State University. Upon graduation, Cliff was married to Julie and they began their time as teachers, Cliff in Greenville and Julie in Sparta. In 1981, Cliff made the decision to explore his lifelong interest and work with his father-in-law, Bill, as a fruit grower in Sparta, Michigan. For the next 20 years, Cliff was in charge of Anderson Brothers Orchards.

As Cliff’s health became more challenging, he earned his accounting degree from Davenport University and began to work for Armock Mechanical Contractors in Sparta, MI as their controller. In 2013, Cliff officially retired from Armock Mechanical Contractors and began his “retirement” returning to his true passion of raising apples alongside his son, Brett. Cliff’s favorite hobby was being a grandfather, and he was known by his adoring grandchildren as “Bapa.” Bapa also enjoyed woodworking and restoring his old John Deere tractors known as “Johnny Poppers.” His love for his wife, children, and grandchildren, but most importantly, his love for his Lord and Savior, whom he faithfully followed and served, will be what is remembered most.

Still remember when I used to go to sparta with my dad Tomas garza and work in the apple orchards Mr. CLIFF used to walk around to check on apples boxes makes sure it was good also always with hos big small, he was a great boss and a great person, our condolences , to all the Andersons family he will be pissed by all hos employess , specially my dad.
- Norelia garza
Dear Julie, so sorry to hear of Cliff's passing. I remember you both as high school Spartans and then both became teachers and busy parents to your two children and many grandchildren. Time sure does fly by! May the Lord watch over You, Jennifer, Brett, and your families during this difficult time! You all are in our thoughts and prayers. Wendy and Ron Burrows
- Wendy Burrows
There are no words. We were surprised and saddened to hear such news. Cliff was beloved by all. He was kind to all. We send prayers for all of his family and friends. Heaven just gained an amazing soul. May his name always be a blessing in the earth. And may God grant His own peace to all who had to say goodbye too soon. Much love, The Youngquist Family
- Cheryl Currier
We were so sorry to hear of Cliff's passing . Our hearts and prayers are with you and your family. - Jim and Natalie
- Natalie Kerby
Julie and family, was saddened to learn of Cliff's passing from the "If you are from Sparta" website today. Just wanted to know, even though it's been some time since we have been in touch, I still have fond memories of you as a couple. One thing I will always remember of Cliff is his warm personality and beautiful smile. Praying that knowing others are sharing your grief will in someway lighten your burden at this time.
- Jim Punches
Deepest sympathy to the entire family
- Paula Wiegerink
What a blessing he is as a husband, father and grandfather. We know he will be missed but what a joy he is experiencing now with his Saviour free from pain. May the Lord bless you with a sweet awareness of His presence, peace and comfort. Praying. Love, Jon and Sharon DeWaal
- Sharon DeWaal
Oh Julie, Jen and Brett, I'm so sorry to hear of Cliff's passing. My thoughts and prayers go out to your family during this time.
- Amber Rollston
Oh Julie, jen and Brett, I'm so sorry to hear of cliffs passing. My thoughts and prayers go out to your family during this time of sadness. Please let me know if there's anything I can do for you ever.
- Amber Rollston