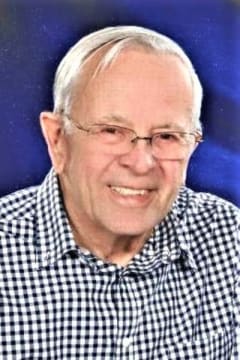 Daniel Lawrence Cheslek, Sr., age 90, of Sparta, Michigan, left for his heavenly home on Tuesday, November 17, 2020. Born in Alpine Township on June 4, 1930 to Francis and Jessie Cheslek, Dan grew up in Sparta where he graduated high school and attended Grand Rapids Junior College. He was proud of his service in the US Navy, where he served in the Korean War. Through his military service he met and married Barbara Sweatman in Cottageville, SC in 1954. They celebrated 45 years of marriage before Barb’s passing in 2000. Most of those years were spent in Sparta where they owned the Hessel-Cheslek Funeral Home and volunteered their time on Northwest Ambulance. Dan was an active and respected member of his community. As a proud veteran, Dan was a lifetime member of the American Legion as well as a member of the Sparta Lions Club and the VFW.
Dan was preceded in death by his parents; his wife, Barb; brother, Richard Cheslek; his sisters, Barbara and Ralph Williams, and Helen and Ralph Pike; sister-in-law, Sylvia Cheslek and daughter-in-law, Susan Cheslek. Dan is survived by his children, Larry and Anita Cheslek of South Carolina, Thomas Cheslek of Sparta, David and Jennifer Cheslek of Washington and Cynthia Funnell of Sparta; 16 grandchildren; 17 great grandchildren; brother, Charles Cheslek; sister-in-law, Diane Cheslek; and many nieces, nephews and cousins.
The family would like to thank the staff at Meadowlark Retirement Village and Emmanuel Hospice for the amazing level of care he received.
A private family graveside service will be held at Pine Grove Cemetery, where Dan will be laid to rest with his wife, Barb. The family will plan a Celebration of Life for Dan in the spring of 2021 when gathering restrictions of Covid-19 are lifted. Those wishing to make a memorial donation in Dan’s memory may do so to either the Grand Rapids Home for Veterans towards their Christmas Wishlist at 3000 Monroe Ave. NE, Grand Rapids, MI 49505 or the Sparta Area Recreation Association at 182 N. State St., Sparta, MI. 49345.

Tom and Family. We were sorry to hear of Dan's passing. He had a wonderful wit and smile. Don/Judy Armock
- Donald Armock
It was with great sadness that we learned of Dan's passing. Our hearts go out to Thomas and all of Dan's family and friends. We send our condolences and will keep you all in our prayers. Fondly, Wayne & Marilyn Youngquist and Cheryl
- Cheryl Currier
Hessel-Cheslek Funeral Home and Reed's Supermarket were separated by just a small alley, that Dan called the DMZ. All the kids going back & forth between the two places was like watching an any hill....lots of movement. Dan always had time to stop, talk to us, encourage us, even on busy funeral days. Growing up, dealing with him, later, professionally, was great because he was part of who I became. Definitely a pillar of our community, but also a builder. Safe journey my friend. Bill Reed
- Bill Reed
Prayers, he will be missed. I loved staying with Barb n Dan when I worked next door at Dr. Bull, Fochtman and Eary's. They both took me in and treated me so well. Hugs to you all.
- Amy Brown Thomas
So many memories of when we were young and got together often with Barb and Dan. Now they and Harold are all resting together side by side in Pine Grove!
- Faye Ann Bristol
So very sorry for the family's loss. He was a special guy & a family friend. Hugs & prayers to the family.
- Shelly Roberts
Nice guy and a lifelong friend. I enjoyed the brief time that I served on Dan's ambulance crew and although we lost both people that we transported we assured the Almighty that it was not our fault. RIP Daniel
- Pete Wolters