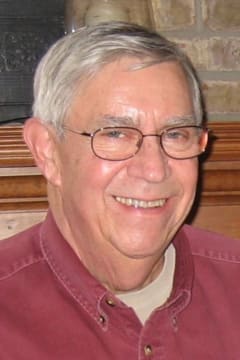 David Paul Linden of Sparta, Michigan, passed away peacefully at home on Tuesday, October 19th at the age of 76 after a lengthy battle with cancer. He was born in Lansing, Michigan to the late Arnold and Elizabeth Linden and grew up in Mason where he graduated high school. He received a bachelor’s degree from Michigan State University and soon began a successful career in Grand Rapids as a certified public accountant before retiring. He was a past president of the Grand Rapids Jaycees and the West Michigan MSU Alumni Association. David was an avid reader with a quick wit. From an early age, he enjoyed spending time every year in the Upper Peninsula. David was a skilled amateur carpenter and a devoted husband, father, and Spartan who will be dearly missed. He is survived by his loving wife, Robyn (Crater-Wolters) Linden, of Sparta, MI; a son, Paul (Dawn) Linden of Plymouth, MI; two grandchildren, Sean and Brooke Linden; a sister, Sylvia (Glenn) Cutcher; a step daughter, Amber Podbregar; two step children, Linda Guth and Jeff Linden from a previous marriage to Barbara (Ruperto) Rodriguez; and several nieces and nephews. David is preceded in death by his brother, John Linden (Christine) and a step son, Robert Guth. A memorial visitation will be held from 1:00 p.m. until 3:00 p.m. on Saturday, December 4th, 2021, at Hessel-Cheslek Funeral Home, 88 E. Division St., Sparta, MI 49345. In lieu of flowers, memorials may be made to the Cancer Research Institute at https://fundraise.cancerresearch.org/fundraiser/3550673.