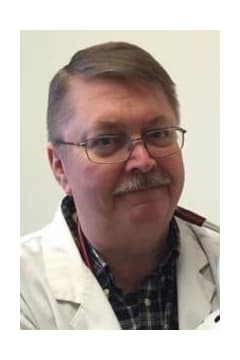 Denis Eugene Edwards age 67 passed away unexpectedly at his home on Thursday, March 26, 2020. He was born in Muskegon, MI to Thomas and Mary Edwards on April 18, 1952. He graduated from Orchard View High School in 1970 then attended GVSU, Ferris State University, then the University of Osteopathic Medicine and Health Sciences from where he graduated. Denis had his own practice in Kent City for many years then worked for a couple of other agencies. He was preceded in death by his parents; his stepson, Kevin Brott; grandson, Dominic. He is survived by his wife, Melissa; son, Daniel and Rachel Edwards and their children, Avery, Ben, and Mason; son, Steve Edwards and his children, Chris and Colin; daughter, Holly Edwards and her son, Sam; stepson, Kyle and Amanda Brott and their children, Judd and Lola; stepson, Tyler and Lindsey Brott and their daughter, Ella; his deceased stepson Kevin's children, Eric, Allie, and Kelsey; several siblings, nieces and nephews. Memorial services will be held at a later date. As Denis had wished cremation has taken place. Those who wish may make memorial contributions can be made to the American Diabetes Association.

Missy and family, I am so sorry to read of Denis's passing. I happened to see you both in Sparta one day and didn't have the chance to speak to you. For that I am sorry. Keeping you all in my thoughts and prayers.
- Shelley Shain
I'm so sorry for the loss for his family! RIP DOC!
- Toni Mckellar
Our thoughts are with the family. I remember Dr. Edwards well as he took care of my family when I was just a child. Then for a short time he cared for my husband and I as young adults.
- Rebecca Walkwitz
So sorry for your loss. Thoughts and prayers are with you and your family!
- Wendy Burrows
Sending my condolences to his wife and family. May you rest in peace, Denis (your sister, Elsie).
- Elsie Sircher
My condolences to the Dan, Holly and Steve and their families.
- KATHY LABIOTKA