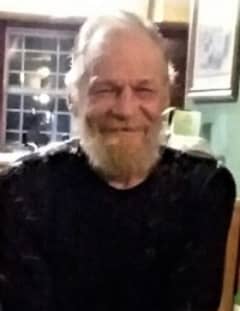 Donald Leslie Foster, Jr. age 66, of Cedar Springs, passed away at his home with his family by his side on Monday, November 4, 2019. He was born in Reed City, Michigan to Donald and Priscilla (Steele) Foster and grew up in Luther. Don graduated from Pine River High School and then proudly served his country in the US Navy. Don married Sandra Dailey in 1973 and they celebrated 45 years of marriage before his passing. Don was a strong man who fought courageously against his illness for the past several years. He was an outdoorsman who enjoyed camping and driving dirt track stock cars in his earlier years. But Don found his greatest joy in being Grandpa to John, Anakin, Skylar, Emma and Olivia.
Don is survived, and will be greatly missed, by his wife, Sandra Foster; daughter, Jodi (Phil) Robeck; son, Jesse (Mary) Foster; Lisa Stevens, who was like a daughter to him; 5 grandchildren; brother, Robert Foster; and many nieces, nephews and friends. He was preceded in death by his parents; his son, Jeremy Foster; his sister, Judy Wert and brother, Ronny Foster.
Services for Don will be held on Friday, November 8, 2019 at 4:00PM at Hessel-Cheslek Funeral Home in Sparta with Rev. Tim Couts officiating. Family will meet visitors for one hour prior to the service starting at 3:00PM. Inurnment will be in Solon Township Cemetery in Cedar Springs. Those wishing to make a donation in Don’s memory may do so to the Friends of Michigan Veterans Homes at friendsofmichiganveteranshomes.com.

Will always remember "Junior" such a great sense of humor-always smiling. My dad had a special place in his heart for him too. So sorry for your loss Debra Foster
- Debra Foster
We were blessed to have known Don! He always had a warming smile and a quick wit about him. He will truely be missed. Our thoughts and prayers are with the family today and in the days ahead.
- Bernie and Laura