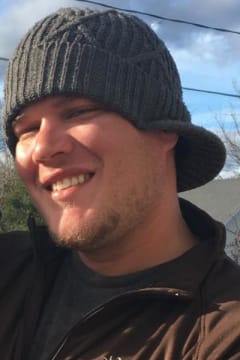 Dustin Alan Anderson, age 35, passed away from accidental injuries on Thursday, September 24, 2020. Dustin was born in Grand Rapids, Mi. to Dale Anderson and Deirdre Imkamp. He grew up in Kent City and was a Union Equipment Operator after graduating from Kent City Highschool. Dustin loved fishing, hunting, sports and doing tree work. He loved the outdoors. But Dustin’s greatest love was his family and especially spending time with his children. His family is heartbroken that he was taken from them far too early and they will so miss his great hugs, but they will always cherish their memories of his spunky, out-going personality and his “cheesy” smile.
Dustin is survived by his parents, Tim and Deirdre O’Leary; his children, Brooke, Jaxin and Brody; his siblings, Kami Anderson (Jason Austin), Cody O’Leary (Stephanie Yarnell), Cali O’Leary, Andrew O’Leary (Ali Howie), Taylor (Jeremy) Finlay, and Skylar and Karly; his aunts, Darla (Mark) Couturier, Donna (Rick) Watson and Dayna (Amber) Anderson; uncle, Rick Imkamp; and many nieces, nephews, cousins and friends. He was preceded in death by his father, Dale Anderson and his cousin, Brandon Couturier.
There will be a Celebration of Dustin’s’ Life held at Mamrelund Lutheran Church in Kent City on Sunday, October 25, 2020 from 1:00-3:00 PM. Those wishing to make a donation in Dustin’s memory may do so to the family towards his Children’s Education Fund.