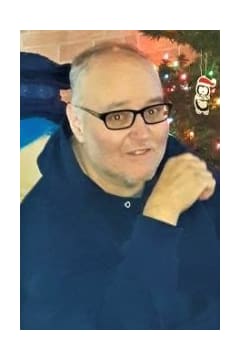 Eugene Ernest Kipp, Jr., age 52, passed away with his family by his side after a courageous battle with cancer on Tuesday, January 21, 2020. He was born in Grand Rapids, Michigan on May 20, 1967 to Eugene Sr. and Diane Kipp. He grew up in Grand Rapids and was a resident of Cedar Springs at the time of his passing. Gene loved old cars, going to car shows and also enjoyed working on them. He will be remembered by his family as a hardworking, all-around great guy who loved spending time with family and friends. And, that he always had a Mountain Dew and Twizzlers close by. Gene had many nicknames but he will be lovingly remembered by his wife as “Pooh Bear”.
Gene is survived by his wife, Mable Kipp; daughters, Tiffany (Dwayne) Harvey, Amanda and Monica Kipp; sisters, Kimberly (Earl) Whiting and Christine (Bruce) Kipp-Drake, very special sister-in-law, Kemmy Lamont; brother-in-law, Rick Lamont; granddaughter of heart, Haylee; and many nieces, nephews and friends. He was preceded in death by his parents, Eugene Sr. and Diane Kipp.
There will be a Celebration of Life held for Gene on Saturday, January 25, 2020 at Hessel-Cheslek Funeral Home in Sparta from 1:00-3:00PM with a luncheon to follow. Those wishing to make a donation in Gene’s memory are asked to please give to the family to help with his final expenses.