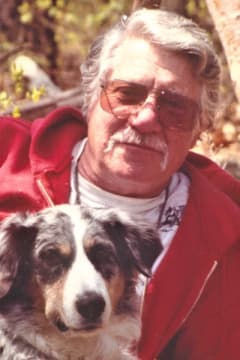 George Francis Brew, age 94, of Sparta, passed away at his home on Tuesday, October 13, 2020. George was born in Grand Rapids, Michigan on August 22, 1926 to Arthur and Marjorie (Ripmaster) Brew. Other than his time proudly serving in the US Navy, he lived his entire life in Kent County. He spent 67 of those years in Sparta, the town he loved, where he was active in Sparta Wrestling. George was an eagle scout, enjoyed hunting and fishing and loved dog-sledding, even participating in the Iditarod Races. But his greatest love was his family and being Grandpa, attending all his grandchildren’s events.
George will be lovingly remembered by his daughters, Georgene Crisler, and Renee (Fred) Farmer; his son, Lance (Theresa) Brew; his grandchildren, Amy Brew, Michelle (Daniel) Rodriguez, Jason (Melissa) Brew, Amanda (Jerome) Bryant and Christopher (Emily) Farmer; his great grandchildren, Anthony, Mateo, Isaac and Harper; his brother, Keith (Linda) Brew; and many nieces and nephews. George was preceded in death by his parents, Arthur and Marjorie; his brother, Jim Brew; his grandson, Lance Brew, Jr. and his son-in-law, Rex Crisler.
Funeral services with military honors will be held on Saturday, October 17, 2020 at 12:30PM at Sparta Baptist Church with Reverend Keith Hemmila officiating. Family will meet visitors at Hessel-Cheslek Funeral Home on Friday, Oct. 16, 2020 from 6-8:00PM and also at the church on Saturday for 1 hour prior to the service beginning at 11:30 AM. Those wishing to make a donation in George’s memory may do so to the Sparta Hunting and Fishing Club at 13192 Long Lake Dr., Sparta, MI 49345.

My deepest condolences to the Brew family.
- Patty Barnes