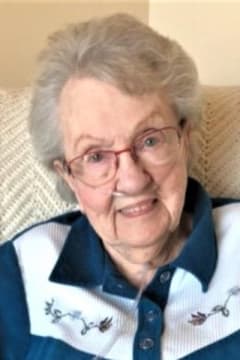 Gladys Marie Huebner, age 96, passed away peacefully on Saturday, September 19, 2020 with her son and daughter-in-law near her side. She was born on September 14, 1924 in Ada, Michigan to Arthur and Louise (Wallace) Winters. She married Gordon Russell Huebner in 1941 in Grand Rapids, Michigan. She was preceded in death by her husband, Gordon; son, Mark G. Huebner; sister, Lauretta Rittenhouse; half-brothers, David, Roger, and Bruce Winters; half-sister, Edwina Stegehuis.
Gladys is survived by her son, Larry J. and Diane Huebner; grandchildren, Dan Huebner, Michael Larson, and Ann Larson; many nieces, nephews and their families: James (Karol) Rittenhouse, James (Debbie) Rittenhouse, Dawn (Alex) Corona, Doug (Lynne) Rittenhouse, Carmen (Isaac) Nwachukwu, Heather (Tony) Grandy, Cheryl (Tim) Piippo, Carla (Alex) Morel, Michelle (Tom) Simpkins, Brent Ramsby.
Gladys will be cremated and laid to rest in Rosedale Cemetery next to her husband Gordon. A celebration of her life will be held at a later date. Those who wish, may make memorial contributions to Emmanuel Hospice at www.emmanuelhospice.org.

Larry my thoughts and prayers are with you. It was such an honor to have been a part of your Mom's life for the past 3 1/2 years. I will miss her smile and her laugh. It always brightened my days when I would visit her. She touched the lives of those who were lucky enough to have been asked into her life. Beth RN Emmanuel Hospice
- Beth Rogers