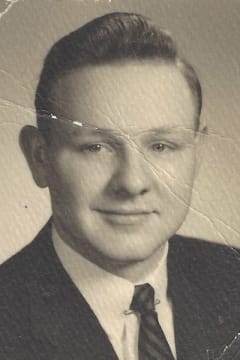 Gordon Lee Ostman, age 89, passed away peacefully at his home in Newaygo, Mi. on Thursday, November 12, 2020. He was born in Sparta, Michigan to Edmund and Effie (Dykhouse) Ostman on March 5, 1931. Gordy grew up in Sparta and graduated from Sparta High School, where he was all-conference in basketball and football and was a member of the Sparta Athletic Hall of Fame. After graduating from Michigan State University, Gordy proudly served his country in the US Army where he was an artillery and security officer during the Korean War. After discharge from the service, Gordy moved back to Sparta where he owned and ran Ostman Floral for 35 years. In his retirement, he wintered in Florida and later moved to Kimball Lake in Newaygo. Gordy was president of the Sparta Area School Board, president of the Sparta Lions Club and served on many other boards in Michigan and Florida. He was proud to be a member of the Ft. Myer’s Beach Veteran’s Club and the Ft. Myer’s Yacht Club. Gordy loved family gatherings at the lake, playing card games, listening to spiritual music, all sports and boating in the gulf.
Gordy is survived by his sons, Dr. David (Rhonda) Ostman, Doug (Sally) Ostman; grandchildren, Taylor and Jake Siegel, Jade; significant other, Charlene Winegarden and her family; special friend, Nick Westcott; brother, Eugene “Joe” Ostman; sister, Patricia Ostman; in-laws, Jerry (Kathy) Bos, Pat Uecker; many nieces and nephews. Gordy was preceded in death by his parents; his wife, Arlene in 2004; granddaughter, Kendall Michelle; sister, Doris Ostman; Several in-laws. Graveside services will be held on Tuesday, November 17, 3:00 P.M. at Greenwood Cemetery, Sparta. Those who wish may make memorial contributions to Spectrum Health Hospice.

The family of Wayne & Marilyn Youngquist send condolences and prayers to Gordy's family and friends. Gordy has been such a part of the lives of everyone here in this community. Personally and professionally. We send our prayers and love to all. We will remember him.
- Cheryl Currier
Gordy was a good friend for many years. We have so many good memories of him and the Ostman family. We send our sympathy to all of you.
- The Eary's
My heart is so heavy for all of you. I have so many memories of Gordy over the years I worked at Ostman. Such a Wonderful family. Love and prayers. Love from Tom and Kathie Frontjes
- Kathie Frontjes