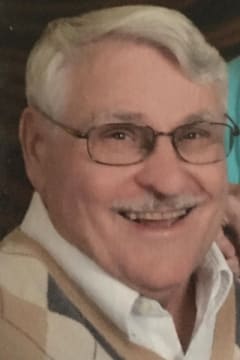 Gordon Lynn Briggs, age 82, passed away unexpectedly on April 28, 2020. Gordon was preceded in death by his son, Jeffrey Matthew Briggs; his parents, Ira Lynn and Evelyn Briggs; brother, Bruce Briggs. Gordon is survived by his wife of 60 years, Pauline Briggs; sons, David (Vicki) Briggs of Sierra Vista, Arizona, William (Ann) Briggs of Walker, MI; grandchildren, Troy (Lea) Briggs, Nic Briggs (Menazuri), Megan (Chet) Tompkins, Ben Briggs (fiancé Emilie Pretzer) and Ian Briggs; great-grandchildren, Sylas Briggs, Leonidas Briggs and another on the way; his sister, Dolores (Richard) Chapin; sister-in-law, Shirley Briggs; brothers and sisters-in-law, Kathleen Darman, Bonnie Schantz, Charles Schantz, Laurel Schantz, Donna (Larry) Lanning; numerous nieces, nephews and friends. Gordon and Pauline hosted several exchange students over the years and maintained a close relationship with their Filipino student, Benedict (Joanne) Acosta and their children, Benjamin and Alex. Gordon thought of Benedict as another son. Gordon lived a full and happy life and found his greatest joy with his family. He and Pauline moved from Sparta, MI to Tucson, AZ in 1991 and he was always happy to call and give the weather report from “beautiful, sunny Arizona.” Gordon and Pauline returned to Michigan in 2017 as their health deteriorated. Gordon served in the U.S. Air Force and received his bachelor’s degree in Accounting from Davenport University. Gordon spent his working years as a certified financial planner and accountant. He was an avid fan of University of Michigan football. For the last few years back in Michigan, Gordon watched the weekly games with his son Bill. There was enthusiastic cheering most days and he assisted the coaches by yelling from the recliner. He loved golfing, especially in Arizona, and was a big fan of the Arizona Wildcats college basketball. Gordon was a longtime member of The Lions Club. Gordon was also a longtime member of Sparta United Methodist Church and Desert Skies United Methodist Church where he was active in the men’s groups and volunteered with men’s breakfasts and flea markets. Gordon particularly enjoyed his “Wednesday Breakfast” with his group of friends in Arizona. He will be dearly missed by many. Because of the current Coronavirus limitations, a memorial service will be held at a later date. For those wishing to make a Memorial contribution please consider the Alzheimer’s Association.

In 1979, Gordy and Pauline , took me, a shy 15-year old boy from the Philippines, and gave me such an unforgettable experience along with countless life lessons that helped shape me during such a formative time in my life. Through his example, Gordy showed me the importance of building family, fostering lifelong relationships, creating memories, living in the present and life to the full. In his sons Dave and Bill - and graciously in me, Gordy's legacy lives on: his love for his wife and family, for others, for Michigan football, for the occasional beer (or six), and the perfect round of golf (the one with friends, jokes and laughter, and no back or shoulder pain). Happy birthday, Dad! We'll miss you. Love, Ben
- Ben Acosta
Became very good friends with Gordy in our mutual financial services careers as well as on the golf course. Gordy was a gentleman, good friend and a source of frivolity. He is leaving behind a huge void within many circles of life, however heaven will be graced by his new residence. God Bless You Gordy.
- JERRY PFEIFFLE