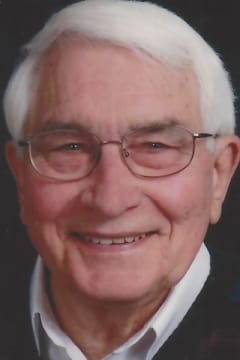 Hessel “Hess” Wever, retired science teacher, pilot, coach, gardener, and accomplished decoy artist, passed away on Sunday, November 15, 2020 in Fremont, MI. He was 90 years old.
Hess was born on a Sunday morning December 8, 1929 at the family farm in Fremont to Henry and Hattie (Brummel) Wever. He graduated from Fremont High in 1948 where he lettered in
basketball, track, and football. He attended Alma College, a school he had never heard of, after a recruiter knocked on his door and offered him an athletic scholarship. There he played
basketball, ran track, and quarterbacked the football teams, winning two MIAA Football Championships. He graduated in 1952 with a bachelor’s in biology education and minor in Spanish (on the promise that he would never teach a foreign language). In 1952, he married his high school sweetheart, Lora Ann Wheeler. Described as “best friends” by many, their union lasted 52 years until Lora’s passing in 2004. The couple moved to White Cloud and then to Sparta where he taught biology and coached varsity basketball and football at the local high school. He taught drivers training and evaded any serious automotive trouble for
an incredible 36 years. In the ‘90s, Hess served on the Sparta Village Council and was also elected Council President. He was a member of the Sparta Methodist Church, the Sparta Lions Club, Maxine’s men’s morning coffee club and was proudly inducted into the Alma College Golden Thistle Society in 2002.
An original founder of the Sparta 140 Club at the Sparta Airport, Hess loved to fly their Cessna around the state. He excelled at growing zinnias, identifying bird songs, capturing resistant
woodchucks in his backyard, giving away bags of tomatoes, and whittling hundreds of North American creatures out of wood, particularly those of the avian variety. He has carved and
gifted a life-size loon to every child and grandchild through the years. Hess adored spending time with his loved ones at the cottage on Emerald Lake in Newaygo which he built with family over the years. There he passed the time eating cherries, reading the paper, and relaxing on the pontoon boat. He would occasionally fish for bluegill off the dock but asked us not to talk about fishing at his funeral so we must move on.
Hess was a foodie in the most practical sense. He had a lifelong love affair with chocolate milk, chocolate cake, rotisserie chicken, gizzards, and fried bluegills (not in that order), and despised beer, which he referred to as “swamp water.” He was known to reheat his coffee several times over in the microwave.
Hess’s life philosophy was compassion. He took extreme pride in his family with whom he would exchange lengthy phone calls, quirky gift boxes, and thoughtful handwritten letters. He was a
stellar teacher, coach, father, grandfather, and a mentor to many in the Sparta Community. He taught us about life, how best to live it and to experience the joy of living in the moment. To say
he will be missed is an understatement – he was our rock.
Hess was preceded in death by his parents, brother Garrison, wife Lora Ann, and daughter Lori Ann Jantz. He is survived by his children Steven (Noriko) Wever of Japan, Nancy (Tim) Bolen of
Shepherd, MI, Jennifer (Julia) Wever of Muskegon, MI; son-in-law Steven Jantz of Sparta, MI; grandchildren Dan (Jane) and Riki Wever, Chase (Heidi) and Kyle (Colleen) Bolen, Alex (Jensen), Rachel (Garrit), and Sophie Jantz; and six great-grandchildren.
A celebration of life will take place when safe to do so.
Donations may be sent to Alma College Advancement Office, 614 W. Superior St., Alma, MI 48801 or the Sparta Sports Boosters.