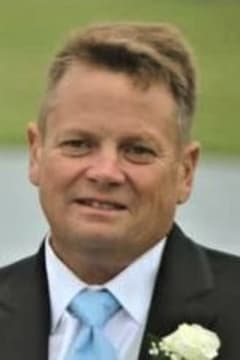 Jeremy J. Rode, age 48, passed away at his home on Thursday, December 31, 2020. He was born in Grand Rapids, Michigan on February 21, 1972 to Bruce Lewis and Barb Drent and grew up in Kent City where he graduated from Kent City High School. He worked as a master plumber for Northwest Kent Mechanical and his family will remember what a hardworking man he was who was always willing to help others.
Jeremy is survived by his wife, Trudy; son, Jeffrey; daughter, Megan; stepson, Dennis Hommerson II; stepdaughter, Cassandra Hommerson; his parents, Barbara and Bernard Drent, Sr.; 4 grandchildren; sisters, Angela (Chad) VanSyckle and Rachael (Chad) Curtis-Zentz; brother, Jason Helzer; stepbrothers, Butch (Connie) Drent and Pete (Carol) Drent; half-siblings, Alicia, Sonya, Angela, Jana, Robert, Nora, Raymond, James and Jessica; his special friends, cousin Nate Rode, Rick Hill, John Green, Steve Fryling and Brad Poss.
Services for Jeremy will be held on Thursday, January 7, 2021 at 2:00PM at the Hessel-Cheslek Funeral Home in Sparta with Reverend Chris Weeks officiating. Family will meet visitors on Wednesday, January 6, 2021 from 2 to 4:00 and 6 to 8:00PM at the funeral home. Interment will be in Solon Township Cemetery. There will be a Celebration of Life held at a later date. Those wishing to make a donation in memory of Jeremy may do so to Shriner’s Children’s Hospital.

I miss u jay.. thank you for all the great memories and the ups and downs at nwk... you will live in my heart forever.... love ya❤️
- Theodore nelson