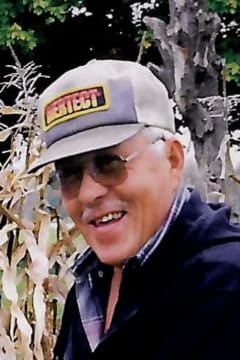 Joseph “Joe” F. Pamer passed away unexpectedly on Wednesday, September 8th at Spectrum Butterworth downtown. He was surrounded by his loving family.
Joe graduated from Kent City High School in 1954. He went to work at Norge Refrigerator after graduating, but then joined the United States Army in 1956 and he proudly served until 1962.

He worked at McInerney’s for 27 years, then went to work for Saurs’ Snappy Apple as a packing shed supervisor and orchard crew boss for another 25 years. Upon retirement Joe liked watching sports and the SyFy channel, telling his grandkids old stories and spending time with his great grandkids. Joe was a quiet, no frills needed man. He will be missed by many.

The family invites you to join them for a Celebration of Joe’s life, to be held on Thursday, September 23rd from 4PM to 8PM with Military Honor Service starting at 6PM, at Hessel-Cheslek Funeral Home in Sparta, MI (88 E Division St).