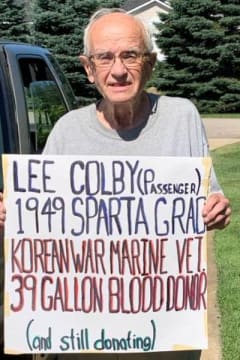 Obituary For Lee I. Colby

Lee Ival Colby, age 89, passed away peacefully on Friday, February 26, 2021 at his home at Meadowlark Retirement Village. He was born August 9, 1931 in Algoma Township to Merrill “Stub” and Eileen Colby. He graduated from Sparta High School and spent two years in the U. S. Marine Corps during the Korean War. He married Luanne Virginia Fahling on October 10, 1959 at Trinity Lutheran Church in Conklin. He worked at the Sparta Foundry for 32 years and finished his career after 13 more years at Blackmer Pump. However, Lee will be remembered because of who he was outside work. He was known for his kindness, patience, and his sense of humor; and he touched countless lives with his generosity and love. He donated just under 41 gallons of blood in his lifetime, taught many years of Sunday School, sang in the choir for decades, worked on food trucks, drove friends to doctor’s appointments, helped neighbors and friends when he knew there was a need, and the list goes on. After his move to Meadowlark, he continued to impact those around him and loved to help wherever needed - he loved his fellow residents and adored all the staff. He was especially fond of his “coffee group”, who made him so happy there. Lee Colby truly was the best earthly example of Paul’s definition of love in 1Cor. 4-5 and will be greatly missed by all who had the privilege of knowing him. He was preceded in death by his wife, Luanne, who he tirelessly cared for as dementia took her from him; his brothers, Kenneth and his wife, Florence Colby, Gordon and his wife, Avis Colby. He is survived by his children, Gary and Odessa Colby of Lexington, KY, Timothy Colby of Sparta, Janice and John Hill of Sparta; 6 grandchildren; several nieces and nephews. As Lee had wished, cremation has taken place and due to Michigan’s funeral restrictions, a private family service will be held at a later date. Those who wish may make memorial contributions to Emmanuel Hospice at www.emmanuelhospice.org or 401 Hall St SW #263, Grand Rapids, Mi. 49503.

One of the nicest men I had the pleasure of working with at Blackmer Pump. He also was one of the sweetest and helpful gentlemen at Meadowlark. A great loss to his community.
- Mary Payne
If you're lucky, when you're a kid there's a non-family adult in your life who asks you questions and really listens to the answers, who makes you feel special every time you see them. Mr. Colby would do this thing where he'd shake you really fast and make you laugh. And he made me peanut butter and sugar sandwiches, which I'm pretty sure I haven't had since I was a kid at his house. Lee Colby was one of nicest people I've ever known.
- Julie Wilde Harrison
Lee was a member of the Class of 1949 along with my mother, Jeanette Reed Tobey. She is not online, but I know she would want to offer her condolences to Lee's family. They stayed in touch over the years and she told me how caring a man he was. Lee's parents, Stub and Eileen were wonderful friends of my grandparents, Walt and Minnie, as well. We send our sympathies to Lee's family. ~Nanci Tobey Swenson
- Nanci Swenson
Our deepest sympathy to you, Janice, Tim, and Gary and your families. There are so many great memories we can recall from our days together in Sparta. Your Dad and Mom provided our family with so much love and support. Your wonderful obituary is a witness to the care and compassion that he showed to so many.
- Art and Carolyn Wilde

Lee was such a sweetheart. He was one of the first people at Peace who was so welcoming when my family and I started attending services at Peace. I adored him. He was a wonderful, sweet, good person. Heaven received an amazing soul. God's Peace, Lee.
- Deb Wells
Lee was a wonderful friend to all of us at Peace Lutheran. He was so kind and caring, always with a smile, and ready to help wherever he could. My favorite memory is when Peace sponsored a Vietnamese family and Lee and Luann developed a life long friendship with Tha and Nguyen and their family. He was a gentle and compassionate man who knew how to make you feel special. We will miss him...sending our love and caring to his family. John and Linda Stark
- John and Linda Stark
Such a friend to all he met with a heart of generosity in countless ways. He will be greatly missed by his coffee hour friends at the Historical Commission.
- Larry Carter

Wayne & Marilyn Youngquist send their condolences, love and prayers to Lee's family. Lee will be missed so much. Their stories abound of Lee's kindness to all. We pray God grant him every blessing in his eternal home, and send his family peace.
- Cheryl Currier
Lee was a kind, faithful man and husband. We appreciated living near him on Nellie Lane and are sorry for the loss of a great man who loved God, his family, and others. Praying for you.
- Ken & Rhonda Vanderwest
I have many fond memories of Lee and Luanne at Wells Lake, when they would come up to Uncle Stub & Aunt Eileens. Unfortunately, life gets in the way and I didn't see him for many years. But when I did, it was the same old Lee. Keeping you all in my thoughts and prayers. You were so lucky to have such a great guy for your dad. Kathy (Kilmer) Witchell
- Kathy Witchell