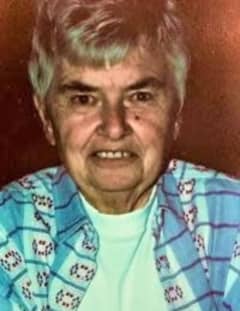 Leona Barbara Ring age 87 of Alpine Township passed away peacefully, surrounded by her family on Saturday, December 7, 2019. She was born on September 21, 1932 in Grand Rapids to Ada and John Sanders, both of whom preceded her in death. She married Don C. Ring on December 12, 1953 in Ovid, Michigan. They were married for 48 years and raised 4 children before Don’s death on October 17, 2001. She is survived by her children, Dianne Ring of Grant, Debra and Jim Kendra of Scottsdale, AZ, Denise and John Kendra of Horton, Duane Ring of Comstock Park; her very special grandchildren, Jessica Kendra and Jennifer Kendra both of Scottsdale, AZ, Tonya Kendra of Horton, Carrie and Donovan Molnar of Jackson; great grandchildren, LeSane Kendra and Savanah; sisters in law, Marilyn Ring, Evelyn Ring; several nieces and nephews. She was preceded in death by her sister, Patricia and Carl Lightfoot; brother, Carl and Olamae Sanders; 3 brothers in law, Robert Larson and Tom Ring. Funeral services will be held on Wednesday, December 11, 11:00 A.M. at the Hessel-Cheslek Funeral Home in Sparta with Rev. Ken Osterman officiating. Interment in Pine Grove Cemetery. Friends may meet the family at the Funeral Home on Tuesday, 2 to 4 and 6 to 8 P.M. and Wednesday from 10 until time of service. Those who wish may make memorial contributions to Santa Clause Girls, St. Jude’s Children’s Hospital, or Alpine Township Fire Department.

Please share a condolence, photo or memory of Leona . We welcome all condolences that are positive and uplifting that will help family and friends heal.