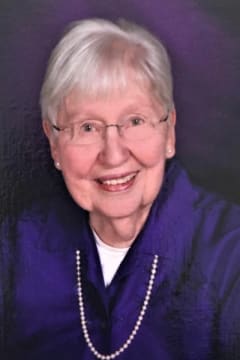 BJORK, MARY ALICE -- On Friday, April 10, 2020 Mary Alice, 89, passed away peacefully in her home surrounded by family after a prolonged illness.
Mary was born on March 29, 1931 in Kent City, Michigan, the daughter of Victor and Lillian (Carlson) Freeland. Mary grew up on the family farm and graduated from Kent City High School and Baker Business College. In her early twenties she lived in Grand Rapids and was the Secretary to the President of Haskelite Manufacturing Corporation until the mid 1950s; she stayed in touch with her fellow coworkers -- the “Haskelite girls” -- throughout the years for regular gatherings. Mary was reunited with her Kent City School classmate, Donald Robert Bjork, walking down the sidewalk in Sparta. They married on July 18, 1953 and built a fruit farm where they raised six kids. Mary was the true matriarch of this large family. Known for her warmth, kindness and hospitality, she successfully raised six kids juggling cooking, canning and making and serving her famous pies and coffee while also doing the accounting and payroll for the farm.
Church was a central part of Mary and Don’s life; their family regularly attended Mamrelund Lutheran Church where Mary taught Sunday School for years and participated in the Elizabeth Guild.
Mary was proud of each of her children. As they grew and left the home, she was blessed with ten grandchildren and two great grandchildren. Mary “Nanie” is survived by her six children: Kathleen (Charley) Budd, Linda (Jeff) Terrell, Diane Bjork, Steven (Cheryl) Bjork, David (Michelle) Bjork, and Sally Bjork, her grandchildren: Allison (Ben) DeBakey, Laura Bjork, Joel (Christa) Bjork, Nick Terrell, Matthew (Elizabeth Sutara) Bjork, Stephanie Terrell, Stuart Bjork, Ethan Bjork, Haydn Bjork, her two great-grandchildren, Jack Bjork and Adelyn DeBakey, as well her brother, Barth (Janice) Freeland and several nieces and nephews. She was preceded in death by her husband, Don, her grandson, Andrew Budd and her brother Robert Freeland.
In light of the current travel restrictions and social distancing due to Covid19, a private family burial will be held on Monday, April 13, 2020. A formal celebration of Mary’s life will be held at a later date at Mamrelund. The family welcomes memorial contributions in honor of Mary to the Mamrelund Lutheran Church Donald R. Bjork Scholarship Fund or the Mamrelund Lutheran Church Food Pantry.

Dear Bjork family, It is with a heavy heart I offer my love and prayer to all of you. Mrs. Bjork is one of the kindest souls I ever was blessed to know. Her love, kindness, and witty humor is instilled in you and that is a wonderful legacy she leaves behind. Until I see you again in Heaven Mrs. Bjork all my love!
- Heather Morgan
GOD SMILING AT ME written by Denise Sorensen-VanGessel I've found a place where I can be free. I've found a whole new beginning just made for me. I know only peace and I never feel pain. Days are full of sunshine and never rain. I'm no longer old, I've recovered my youth, And all of my dreams have become the truth. I can smile. I can laugh. I can walk. I can run. I can hear every whisper. I can see past the sun. My body is whole and my mind is clear. I know all the answers and I'm free of all fear. I know why you mourn me, I see how you weep. Your heart's full of aching from a love that is deep. And I'm grateful for loved ones who hold me so dear, But remember, I've found a better place here. I will be there beside you always nearby, So don't mourn me too long, nor forever cry. And whenever your sorrow bears down on your heart, Think not of my ending, but of my new start. For on earth, there's no joy that I'd ever see, To compare to the joy of God smiling at me.
- Denise VanGessel
The Youngquist Family sends condolences and hugs to you Kathy, Linda, Diane, Steve, David, Sally and your families. We go back so many years together. Your mother, and your father, have been treasured friends. Such kind, gracious and giving people. We are keeping you all in our prayers and hope to hug you in person when this pandemic is over. Until then, know you are loved. We were heartbroken to hear that your mother left our world. But we were so relieved to hear that you all were able to be with her. We all look forward to that future reunion, where goodbyes will never part us again. Until then, may God grant you His own peace. Love, The Ys.
- Cheryl Currier