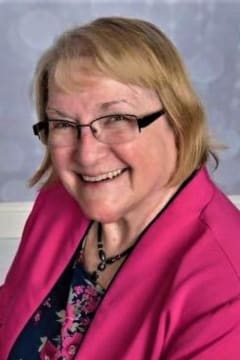 Mary Ellen Bliss, age 75 of Sparta, passed away peacefully on Monday, April 5, 2021 at her home with her family at her side. She was born August 9, 1945 in Grand Rapids, MI to Clement and Florence Mathieu. She graduated from Catholic Central High School in 1963, attended Davenport University and retired from Sparta Area Schools. Mary married Thomas W. Bliss on May 22, 1965 in Grand Rapids and they were members of Assumption of the Blessed Virgin Mary Catholic Church in Belmont.
Mary is survived by her husband of 55 years, Tom; her son, Thomas Bliss, Jr.; daughters, Tammy and Paul Peterson and Bonnie and Paul Polega, Jr.; grandchildren, Rachael Peterson, Ben Peterson, Bryanna Polega, Mercedes Polega, Alexis Polega, Paul Polega III, William Bliss and Daniel Bliss; great grandchildren, Avorie Foster and Kairi Polega; siblings, Thomas Mathieu, Richard (Ingrid) Mathieu, Nancy (Arthur) DeCamp, Rose (Mark) Donker and Mike Mathieu; in-laws, Deb (Jeff) Popma and Barb Bliss; and many nieces and nephews. Mary was preceded in death by her parents, Clement and Florence Mathieu; brother and sister-in-law, James and Phyllis Mathieu; mother-in-law, Elaine DeWitt and brother-in-law, Randy Bliss.
Mass of the Christian Burial will be offered on Friday, April 9, 2021 at 1:00 P.M. at Assumption BVM Catholic Church in Belmont with celebrant, Father Larry King. Interment in Resurrection Cemetery, Grand Rapids. Due to Covid-19, no visitation is being held at this time but will be arranged at a later date. The family asks that to protect Mary’s relatives, masks be worn at the church and during the Mass. Those who wish may make memorial contributions to Faith Hospice at www.faithhospicecare.org.

This is from Bonnie and Charlie Myers and family. "Mary was the first parent I met through teaching at Sparta. We were standing next to each other watching the Labor Day Parade. She mentioned she had a child starting school at Algoma where I was teaching. This was the beginning of a long friendship. To Tommy, Tammy and Bonnie, I know what it's like to lose my mother. My thoughts are with you during this time of reflection. May God comfort you with His Presence.
- bonnie l myers

Tom, Tommy, Tammy, Bonnie and families. Gary and I are so sorry to hear about Mary's passing. We will keep everyone in our prayers. Unfortunately we are unable to attend the service. Sending hugs to all.
- John Coates

Dear Tom and family. I am so sorry to hear of Mary's passing. You're fortunate to have had such close, loving relationships. Prayers that God will comfort all y'all and send positive thoughts about the reunion we'll be having when we greet Jesus and our family members the have gone on before us. What a time that will be! Much Love, Sally (Rayner) Lyons.
- Sally Rayner Lyons