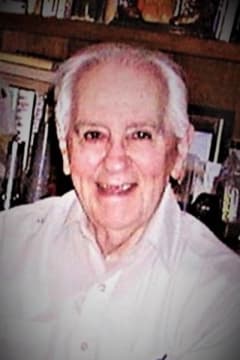 Mason Elwood Grove, age 98, passed away at his home in Meadowlark Retirement Village on Tuesday, September 8, 2020. He was born in Altoona, Pennsylvania on May 11, 1922 to Mason R. and Gladys (Horton) Grove. He attended Mt. Union High School in Mt. Union, Pennsylvania and then joined the US Army where he proudly served his country during World War II. After returning from the war, Mason attended Bowling Green State University, where he met Charlotte Nutter. They were married on September 10, 1950 in Milton Center, Ohio, and he passed away the week of their 70th wedding anniversary.
Mason worked for many years as a pastor and chaplain. A faithful husband, father, and friend, Mason was known for his gentle spirit and his deep and abiding love for the Lord. He was always prepared to share a powerful mini-sermon or a story from his boyhood, college, or Army days. He inspired everyone he met through his remarkable testimony and his love for the Lord and for others.
Mason is survived by his wife Charlotte, along with their son, John (Maureen) Grove and daughter, Alison (Jim) Laur. Also surviving are his grandchildren, Amy (Paul) Dematatis, Ben Laur, John Michael (Chrissy) Grove, and Richard Grove; great grandchildren, Zoe Grove, Madeline Grove, Lydia and Mason Dematatis; and many extended family members.
There will be a small outdoor gathering in Mason’s memory at Meadowlark Retirement Village on Thursday, September 10, 2020 beginning at 11:00 AM. Mason will be interred in Milton Township Cemetery in Custar, Ohio on Saturday, September 12, 2020 at 1:00PM. Those wishing to make a memorial donation in Mason’s memory may do so to Mel Trotter Ministries at www.meltrotter.org.

Rev. Grove was the best. He cared about people no matter who they were. He set great examples of patience, kindness and faith. My life is better because he is a part of it. Thank you Rev. Grove!
- David Spiegel