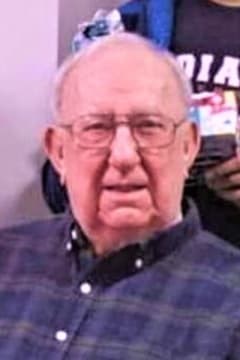 Richard Paul VanEck, Sr., passed away unexpectedly at his home in Sparta on Sunday, December 20, 2020; he was 83 years old. He was born in Grand Rapids, Michigan on November 21, 1937 to George and Florence VanEck. He was a graduate of West Catholic High School and attended Grand Rapids Community College. Dick proudly served his county in the Army National Guard as a Sergeant and was a sharpshooter. He married Ruth Ann Wheeler in 1971 and she preceded him in death in 2014; they were members of Holy Family Catholic Church. Dick worked as a die maker and retired from Auto Die Corp in 1999 after 37 years. He enjoyed fishing, golfing and bowling in his younger years. His family will lovingly remember what an amazing man he was and how his personality drew people to him, his list of friends being too numerous to mention. He was a member of the North Kent Eagles, Moose Lodge #50 and the Kent City American Legion Post 123.
Dick is survived by his children, Renee Brisbin-Patterson, Richard (Carol) VanEck, Jr., Craig VanEck, Roxanne Cheesbro, Susan (Dave) Mugridge, Robin Price, Anne (John) Dykstra, Rick Brisbin and Aaron (Kari) VanEck; 16 grandchildren and 25 great grandchildren; his siblings, Bob (Bonnie) VanEck, Sandy (Jim) Zigler and Michael Guzman; his in-laws, Roger (Bennye) Wheeler, Gordon (Bonnie) Wheeler and Barbara Wheeler; and many nieces, nephews and friends. Dick was preceded in death by his parents, George and Florence VanEck and his wife, Ruth Ann VanEck.
Due to Covid-19 gathering restrictions, there will be no funeral held at this time. At a later date, Dick will be laid to rest with his wife, Ruth Ann, in West Pine Cemetery. Those wishing to make a donation in memory of Richard may do so to Kent City American Legion Post 123 at 14111 Ball Creek, Kent City, Mi. 49330.