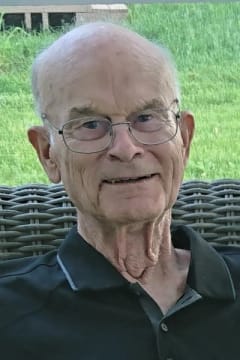 Robert Leland Bradford, age 88, passed away peacefully at his home in Lakeland, Florida on Wednesday, September 30, 2020 after being afflicted with Parkinson’s Disease for over 5 years. Robert was a lifelong resident of Sparta, Michigan where he resided for 68 years before retiring to Florida.
Robert is survived by his loving wife of 63 years, Patrecia, and their children, David and Carol Bradford of Ann Arbor/Columbus, Ohio, Bruce Bradford and Margaret Savoca of North Carolina, Marvin and Ruth Bradford of Sparta and Carolyn and Craig Johnson of Washington. He will also be dearly missed by his grandchildren, Katie Bradford (Joseph Viviano), Rachel and Kevin Greene, Laura and Matthew Johnson, Steven Bradford (Liz Rey), Taylor and Katy Bradford and Morgan Bradford (Zac Pearson). Robert is also survived by his brother Stuart (Harda) Bradford; sisters, Emily (Rudy) Cooper and Chloe McGehee; in-laws, Dick Bacon, Connie Chick, Cathy (Tom) Lowell, Chris Dingee and Bob Hammond; and many nieces and nephews. He was preceded in death by his parents, Carl and Alice (Hitchcock) Bradford, his sister, Barbara Bacon and brother-in-law, Keith McGehee.
AS Robert had wished, cremation has taken place. Due to Covid 19 restrictions, Robert’s family is planning funeral services for the summer of 2021. Those wishing to make an expression of sympathy may do so to First United Methodist Church’s Children’s Clothes Closet, 72 Lake Morton Dr., Lakeland, Florida 33801 or the Van Andel Institute for Parkinson’s Research at Attn: Development, 333 Bostwick Ave. NE, Grand Rapids, Mi. 49503 or at https://www.vai.org/help-donate/memorial-tribute-funds/

Dad..I have always been so grateful for the best part of my life was a gift from you and Mom. Without Carol in my life I would be nothing. Thanks for raising a wonderful woman that completes me. I felt like I was family right from the beginning as we spoke. Thank you for all your love and support over the past 28 years I learned so much from you. Love you and will always carry your love for life with me. RIP Dad you were the best
- Craig Johnson
Love and miss you Dad. So proud of bring your daughter.
- Carolyn Johnson