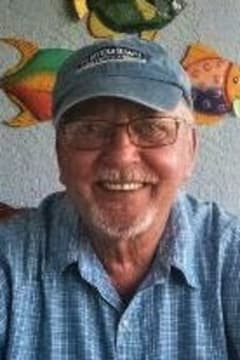 Robert Lee Vander Band, age 77, passed away on Wednesday, June 24, 2020. He was born in Grand Rapids, Michigan to John and Cora (Doorn) Vander Band on December 7, 1942. He was married to Beverly Smith in 1995 and he passed away 2 days shy of their 25th wedding anniversary. Bob was a member of the Sparta Moose Lodge, Sons of the American Legion and Great Lakes Seniors Golf Assn. He was an avid reader who enjoyed playing a round of golf, visiting friends at the Moose and spending his winters in Florida. But mostly Bob loved his family and spending time at the lake house on Camp Lake. He will be greatly missed and will be remembered for being an all-around great guy who was a hard-worker with an awesome sense of humor.
Bob is survived by his wife, Bev; his 3 sons, Robert and Rose, James and Patty, David and Virginia; 9 grandchildren and 8 great grandchildren; sister, Joyce (Jack ) Duimstra and brother, Ron Vander Band; sister-in-law, Barbara (Gary) Becker; special friends, Bill and Sue Kamp; many nieces, nephews and friends; and his special dog, Sassy.
As Bob had wished, cremation has taken place and a private family service is being planned. Those wishing to make a memorial donation in Bob’s memory may do so to Faith Hospice at faithhospicecare.org.

Bob has come in and had his "saftey meetings" for years now every Monday. I've had the pleasure of getting to know him and his love for his wife, family and dog(s). He will always be one of my favorite people to have the pleasure to wait on. His humor and hugs were the best and it just won't be the same without him. Bev, my heart goes out to you, he was such a fun guy and a character I'll never forget!
- Michelle Nota
Ive been takinging care of Bob and his "safety meetings" every Monday for years now. Hands down one of my most favorite people to serve ever. He could always make me laugh, had great hugs, loved his wife, family, and dog very much.
- Michelle Nota
Our sincerest prayers and best wishes for our close friends and neighbors not only on Camp Lake but also In Florida. We will never forget you Bob and we will never forget your lovely wife Bev as you both are in our hearts. We will miss our special safety meetings at 4:00 that we have had but will continue to help give Bev correct safety instructions as we all move forward.
- Ron and Michelle
Bev i am so sorry to hear about bob i loved talking to you both my thoughts and prayers to you and your family
- Baker Bev
Great guy ,always made me laugh, he will be missed by many. Bob Armstrong
- Bob Armstrong
Bev and family, so sorry to hear about Bob he will be missed by many people.
- Bob Armstrong
Always a quick wit and great all around person. You will be missed by many. My thoughts and prayers go out to Bev and the family .
- Sue Haas
Bob always had a smile on his face his sense of humor was a little bit lacking from time to time but he always made me laugh, rest in peace my boogie man
- Susan Roedema

Leave a message to share your favorite memories an:

To leave a condolence message, add photos, or add