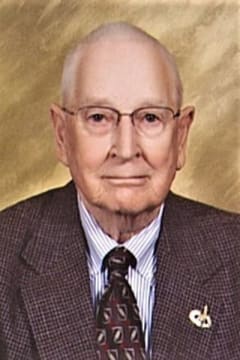 Robert Wendell Brott, age 96, of Kent City, Michigan, passed away peacefully on Sunday, January 24, 2021. He was born in Casnovia, Michigan on June 14, 1924 to Henry and Reta (Haskell) Brott. Bob was raised in Casnovia and graduated from Kent City High School in 1942. He proudly served in the US Army, where he was a Bronze Star Recipient during WWII. Bob married Lola Anderson in 1946 at Mamrelund Lutheran Church and they moved to Kent City. Bob and Lola celebrated 60 years of marriage before her passing in 2007. Bob ran Brott Lumber and Fuel in Kent City and later worked, and retired from, the Sparta Foundry. He was a lifelong member of Mamrelund Lutheran Church and the Kent City American Legion Post 123.
Bob was preceded in death by his wife, Lola; his sons, Brian, Mark and Philip Brott; and his grandson, Kevin Brott. He is survived by his daughters-in-law, Kay Brott and Linda Brott; grandchildren, Kyle and Amanda Brott, Tyler and Lindsey Brott, Kyle Brown & Chad Robinson, Jared Brown and Becky Schmidt; great grandchildren, Eric, Allie, Kelsey, Jude, Lola, Ella, and Lillian; and many nieces and nephews.
As Bob had wished, cremation has taken place. There will be a funeral and burial with full military honors held in the spring. Inurnment will be in Idlewild Cemetery, Kent City.

I fondly remember Mr. and Mrs. Brott as positive supporters of their grandsons athletic experiences at Sparta High School. I had many memorable interactions with Mr. Brott, his son Mark and his grandsons. Please accept my sincere condolences for your loss. Arnie DePagter, former athletic director at Sparta
- Arnie DePagter