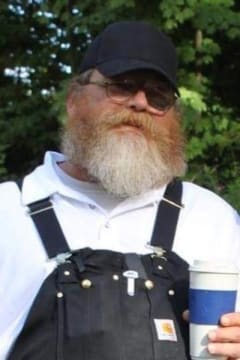 Roger Dale Bronner, age 60, of Grant, Michigan, passed away at his home on Monday, August 10, 2020 after a courageous fight against renal failure. He was born in Grand Rapids, Michigan on March 19, 1960 to Robert Bronner and Betty Justus. He was lovingly raised by his grandparents, Roy and Leona Bronner. By his grandfather Roy's side he discovered his love of hunting and fishing. He went on to share that love with his children and enjoyed spending weekends camping with his family (children, grandchildren, sister and nephew Calvin). Roger is survived by the love of his life, of more than 44 years, Carol; his three loving children of whom he couldn't have been more proud, Julie (Jeffrey) Stephen, Desir'ee (Dustin) Wendt and Dakota Bronner (Stephanie); his two grandchildren, Cameron and Lillian; sisters, Robin Bronner and Joy (Steve) Seefeld; and many nieces, nephews and friends. Roger was preceded in death by his grandparents; parents; and two brothers, Larry Justus and Leon Johnson. As Roger had wished, cremation has taken place and inurnment will be in Idlewild Cemetery in Kent City. A Celebration of Life will be held on Saturday, August 29th, 2020 from 2:00PM - 5:00PM
at the VFW POST 4249 at 9075 Mason Drive Newaygo, MI 49337. Those wishing to make a donation in Roger’s memory may do so to American Kidney Fund at www.kidneyfund.org or to American Diabetes Association www.diabetes.org.

We never met except through Cody you should be proud of the man you raised. Know that you will live on in the hearts of your family and they recall all of the special times you spent together. Rejoicing with them that you are pain free and resting in peace in the arms of our Lord.
- cheryl
Rest In Peace Brother
- Joy Seefeld

Offer words of sympathy and comfort, share a memory or light a candle.: