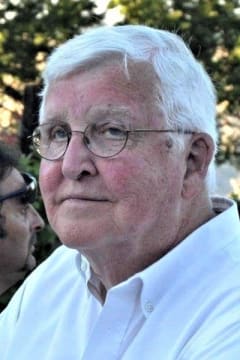 Ronald Kenneth Klein, age 84, passed away at Spectrum Butterworth in Grand Rapids, Mi. on Sunday, September 27, 2020. Ron was born in Conklin, Michigan on August 11, 1936, one of six children of Kenneth and Lois (Averill) Klein.
Ron is survived by his daughters, Elizabeth “Libby” (Joseph) Rapier of Irons, Mi. and Sarah (John Paul) Gallegos of Missoula, Montana; 5 grandchildren, Casey, Cassidy, Tanner, Nicole, and John Peter; 9 great grandchildren; his siblings, Leroy (Gail) Klein, Enid (Ed) Pierson, Marvin (Anita) Klein, Roger Klein, Kay (Mike) Kober, and Leah (Darwin) Kornowske; many (favorite) nieces and nephews, and numerous friends. He was preceded in death by his parents, Ken and Lois Klein.
Ron's life was driven by his insatiable quest for knowledge and limitless curiosity. His early years were spent on the family farm in Sparta, Michigan and trying to convince his siblings that he was Mom's favorite. After graduating from Sparta High School in 1954 and serving in the US Air Force, Ron's ambitions and eagerness to explore life beyond the farm eventually led him to California. He earned his Bachelor's Degree at San Jose State, and later- a Master's in Business Administration from Stanford University. The decades that followed were filled with a string of successful business ventures in various states, with a few marriages and numerous life-long friendships made along the way.
Ron will be remembered as a lively conversationalist and deep, thoughtful thinker. He never met a topic or perceived crisis that he did not like. The opportunity to ponder, discuss, and solve a problem was a welcome challenge- and his insight and advice was often sought by those that were closest to him. He loved to take long drives that would last hours at a time, where he delighted in soaking in the world, ideas, and scenery around him. He kept notebooks of his thoughts and musings within reach at all times; tokens for his family that provide glimpses into the thoughtful approach he had for life.
Other favorite pastimes include playing and listening to the piano, overuse of the term "big time" to describe virtually anything that excited him, and telling every single one of his nieces and nephews that they were his "favorite" and/or the "world's greatest kid." The diplomat in Ron suggests that he meant it every time and that they were all- indeed- his favorite.
To honor Ron's wishes, cremation has taken place and the family is planning a Celebration of Life that will honor him in the Spring of 2021. At that time, his friends and loved ones will return to the place it all started- the family farm in Sparta, Michigan- to honor his memory and share the plentiful "Ron Stories" that we each hold dear. Ron's family will update his friends and loved ones as plans and dates are set.

May Ron rest in peace. God's peace to Kay, Roger, Leroy and all the friends and family.
- Renae Wells
We were shocked and saddened to hear of Ron's sudden passing. The Klein family and ours go way back, as both neighbors and family, here on The Ridge. Our thoughts and prayers go out to all of his family. It saddens us that they have lost him too soon. We pray they will have God's peace during this time of grief. And we send our love. Wayne, Marilyn & Cheryl Youngquist
- Cheryl Currier