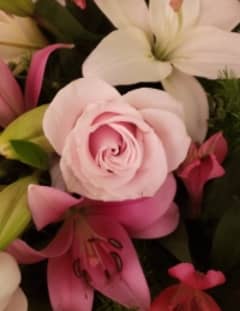 Susan Lorraine Cheslek (Roemer), age 54, was ushered into heaven Thursday, October 10, 2019, while her hand was held, after a quiet, private, year-long struggle with cancer. She was born September 7, 1965 in Detroit to Oliver and Joan (Rice) Roemer. In the early 1970’s the family moved to Morley, where she graduated from Morley-Stanwood High School in 1983.
Susan was preceded in death by her parents and youngest brother, Curt. She is survived by her husband, Tom; daughters, Katherine and Robert Vargo, Christine and Severiano Chavez Jr.; sons, Thomas Cheslek, Garrett Cheslek. She will be remembered as Grandma Susan to Sevi and Sam Chavez, and as Zsa Zsa to Jack and Isla Vargo. She is also survived by her brothers, Marc and Sarah Roemer, Eric Roemer; several in-laws, and nieces and nephews.
Susan was honest, strong-willed, sincere, smart, and funny. She always had a creative vision, timeless taste, and desire to leave everything she touched “prettier” than she found it. Susan was known for her exquisite handwriting and artistic instincts. Never formally trained, she could illustrate beautiful pictures by hand. Her compassionate heart would result in gifts for people because she would see something that made her think of them, or just to brighten someone’s day.
Susan found joy in her flowers. Choosing the right pots, arranging planters and decorating trellises with floral vines was a point of pride for her. She even created a large walk-through garden in front of her house that you could often, in previous summers, find her tending to in her distinct, signature style: a black skirt, heels, hair curled, and makeup done.
The family would like to thank special family friend, Angie Andersson for her love, compassion, and caring that gave Susan and her family comfort throughout the journey.
A private family service has taken place with burial in Greenwood Cemetery, Sparta.
The family would like to take a non-traditional approach to memorial contributions, by donating resources for families spending time on Spectrum Health’s 5th Floor, Oncology. Anyone wishing to make a donation may help the Cheslek family in updating Family Room items such as puzzles, games and books, along with gift baskets containing comfort and necessity items. Any contributions or gifts toward this effort can be dropped off at the funeral home.

Our deepest, heartfelt empathy for Tom and family. We will remember those distant summer nights when dirt and ditches surrounded your home, only to give way to Susan's creative direction and flair for landscaping and gardening. When all of our lives went to the dogs, it was fun to compare stories about our puppies and laugh about their antics. Tom, may you and your family find God's peace and feel His grace in this season of harsh mercy.
- Kalish
You have forever been a friend and always will be. I am sorry for your loss and hope all is and will be okay in your future.
- Bill Hall
Our hearts go out to you and your family Tom.
- Becky Klein
We are truly sorry to hear of the loss of your wife and mother. May God bless you in your sorrow and help you to endure the days ahead. We care. Sincerely, Norb & Susan Denhof
- Norbert Denhof
RIP Susan. God's peace to Tom and all your family. May your great memories sustain you!
- Renae Wells
I am so sorry for your loss! Our thoughts and prayer to you and your family from our family!
- Amy Miedzielec
Prayers for Tom and families,sorry to hear about Susan . She always was a beautiful,sweet person. We can only imagine what is waiting for us. Hugs Tom❤️
- Donna May