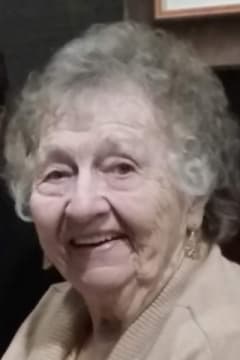 Virginia F. Johnson, (Dauser/Wildeboer), age 94 of Kent City, Michigan, died on May 26, 2020. She was preceded in death by her husband C. Robert (Bob); step-son, Robert (Butch) Johnson; step daughter in law, Sharon Johnson; parents Robert & Florence Dauser; brother, Bob & Sally Dauser, their children Bob & Gail Dauser; sister, Marge & Don Biggs; grandparents, Mr. & Mrs. August Klint and Mr. & Mrs. William Dauser. Surviving are her wonderful children; Judi Wildeboer, Steve (Shirley) Wildeboer, Jeff (Yon) Wildeboer, Chris (Cindy) Johnson, and Kim (Brian) Christner; stepchildren, Gary (Helen) Johnson and their family, Mary Johnson and her family, Mary Jane (Byron) Brown & their family, Larry Johnson and his family, and Sandra Johnson; grandchildren: Todd (Becky), Heather (John), Ryan, PJ, Katie, Ethan (Rachele), Jacob, Logan, Devon, and Derek; great grandchildren, Sydney, Morgan, Ben, Taylor, Ivan, Cian, Ava, Elijah, Anthony, Weston and Rhyligh; brother, Ray (Mary) Dauser and his family; special cousin, Betty Jean (Jerry) Hendricks; many nieces and nephews; many friends at American Legion post 311, American Legion post 47, her Marine family and her friends at the Grand Rapids Outpatient clinic. Virginia was a past matron of the Eastern Stars post 109, room mother president at W. Kelloggsville and Sparta schools. Virginia was also active with the Marine Corps League Auxiliary since 1967, serving as department president, state president and ultimately national president in 1980. In this role, she attended many state & national functions to share her story, love and dedication to our service men and women. She wanted everyone to care for and honor our veterans and became known as “the travelling president.” In 1981, she decided that veterans awaiting medical services at the Grand Rapids Outpatient Clinic should be offered a cup a coffee. She then devoted the next 38 years to her veterans. She coordinated volunteers, purchased & delivered coffee and cookies and supported numerous events in her role as volunteer coordinator. In 2019, she was recognized for her 8000+ hours of volunteer service. Memorial donations may be made to the Walter Durkee American Legion Post 311 Virginia F. Johnson Scholarship Fund, the Marine Corps League Auxiliary National Scholarship Fund or Mamrelund Lutheran Church. Visitation is planned for August 20 with funeral services at Mamrelund on Virginia’s 95th birthday, August 21. Please prepare for a celebration of her amazing life.

I had the honor of knowing Virginia while being a member of the League. She always had a smile and a hardy welcome to everyone. I will miss seeing her at the gatherings of the League. She will be greatly missed. May God be with you in this time of sorrow, and all of us who got to know her, she will be in our hearts and prayers. God bless, Ray Rowley
- Raymond Rowley
Oh what a sweet woman of God! She invested in my life for many years. She taught kids church and Sunday school back in the 70s at Calvary Memorial Assembly of God (now Daystar) in Grand Rapids, MI. Miss Ginny taught us all the word of God and how we needed to hide it on our hearts . I remember memorizing Bible verses and after reciting it back to her she would give the verse to us she had written on a shape relevant to the verse. Thank you Miss Ginny for pouring into my life...may the Lord bless snd comfort your beautiful family! Forever grateful! Cheryl Whittum Livonia, Michigan
- Cheryl Whittum
The Youngquist family goes way back with Virginia and her family. We are going to miss her sharp wit, her positive outlook and her laughter. She was a force of nature and a challenge to keep pace with too! She'd get that twinkle in her eye and we knew we were in for a treat. Her stories, her jokes, her open heart and her love for life, were contagious. There was never a dull moment when Ginny entered a room. She always left us with smiles on our faces. A truly remarkable soul has moved on, and we know heaven just got brighter. We send our love and prayers to her family at this time. May you continue to carry on the very best of her. You already do, and it shows. Many hugs from the Wayne and Marilyn Youngquist Family
- Cheryl Currier
Your Mother was a friend who has inspired all of us to reach out to help others. Her memory will continue to live on, as well as her love that she has shown to all, no matter who you are. She will truly be missed, but we have the assurance that she is with the the Lord. I can just imagine of all of the Marines who have gone before and who have had the pleasure to know Virginia will be welcoming her at the gates of Heaven. She will always be in our hearts. Ron and Mary Brief
- Mary Brief