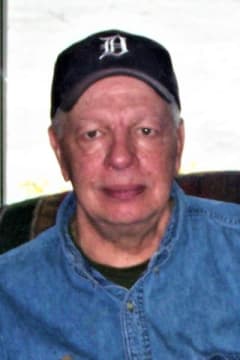 William Howard Wood, Jr., age 76, of Casnovia, passed away at Mercy Health St. Mary’s on Sunday, August 16, 2020. He was born in Los Angeles, California to William H. Wood, Sr. and Arlene (McNamara) Wood on December 20, 1943. After graduating high school, Bill proudly served in the US Air Force and then worked as a tool and die machinist at AutoDie until retirement. He was an active member at the Kent City American Legion Post 123. Bill was a talented woodworker, enjoyed riding his motorcycle, and was a history buff who enjoyed Native American art, especially eagles. He will be lovingly remembered by his family for his (dry) sense of humor and the generous and giving man that he was, not just to them, but to everyone he knew.
Bill is survived by his children, Kirk Wood, Lynda Weston, Barbara Grice, Kellie King and William (Amy) Wood, III; 14 grandchildren and 13 great grandchildren; and many nieces, nephews and friends. He was preceded in death by his parents, William Wood, Sr. and Arlene Schugars; son, Douglas Wood; grandson, Daniel Weston; his son-in-law, Timothy Grice; daughter-in-law, Patricia Wood; and his only brother, Craig Wood.
Services for Bill will be held at Hessel-Cheslek Funeral Home in Sparta, Mi. on Thursday, August 20, 2020 at 12:00PM. Family will meet visitors for 1 hour prior to the service beginning at 11:00AM. Inurnment will be in St. Mary’s Cemetery in Muskegon. Those wishing to make a donation in Bill’s memory may do so to the Kent City American Legion Post 123.

I'm so sorry for your loss. Bill and I were great friends in our teen year and I have so many good memories . We had our Mothers drinking lots of coffee together worrying about what kind of mischief we were getting into.
- Bob Outwin
We are so sorry for the loss of your father. Please let us know if you need anything. Rick Wright
- Rick Wright